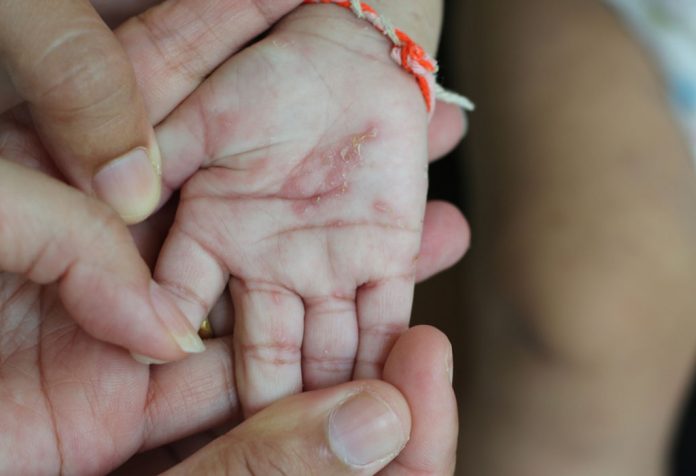 To the untrained eye, Psoriasis might look like a severe case of nappy rash, especially if your little one is not toilet trained. Psoriasis appears in the diaper area for infants, but it can also appear on the face, chest, stomach and on the scalp, which can be easily confused with severe dandruff.

Psoriasis in babies is an uncommon skin condition that can affect children at an early age, but in most cases, it doesn’t develop until teenage or later. It can be identified by red patches, which are raised and covered with silver scales. It arises due to the rapid growth of skin cells, which build up and shed quicker than usual. Psoriasis appears on the knees and elbows but may spread to other areas such as the armpits, near the bottom and the back of the knees.

Paediatric psoriasis is a rare, inflammatory skin condition, which affects children, in two forms, they are:

Is Psoriasis Common in Children?

Psoriasis in babies can lead to significant psychological harm as they grow up. Studies state that more than 20,000 children are diagnosed with psoriasis, in the United States, every year. Around 0.7% of kids are affected by this disease, globally. About 1 in 10 children develop psoriasis by the age of 10. It is vital to treat childhood psoriasis immediately. Skin conditions can be possibly painful and uncomfortable. They may also make your child feel anxious, worried or sad. Psoriasis has the potential to damage the heart over time.

It can lead to unhealthy changes in blood fats, blood pressure, and insulin levels. When all these occur together it is known as metabolic syndrome. This has been linked to diabetes, and heart problems. Children with psoriasis have been observed to have a higher risk of obesity leading to heart problems.

Can Psoriasis be Cured?

Although Psoriasis cannot be cured, it can be managed through various treatments.

Types of Psoriasis in Children:

Conditions That Increase the Risk Of Getting Psoriasis in Children

While the exact causes of psoriasis are unknown, the various triggers that may cause a psoriasis outbreak, are as follows.

Causes of Psoriasis in Kids

Psoriasis is an inflammation and is not contagious. Due to lack of awareness, people fear that the infection can spread just by touch which is not the case. The reason for this misconception is that they think the disease is caused due to some type of viruses, fungus or bacteria. However, It arises due to inflammation and problems caused due to a poor immune system.

How Can You Tell Whether It Is Psoriasis or Eczema?

Psoriasis is itchy and one is likely to experience a strong stinging and burning sensation. Some people have described it as being bitten by fire ants. Many people can confuse eczema with psoriasis. Eczema is accompanied by an intense itch. People have been known to scratch so much that their skin bleeds. Eczema causes inflamed red skin which can be crusty or scaly. You may see leathery rough patches, which are dark sometimes. It may also cause swelling in certain people. It is similar to psoriasis in many ways, you may also have red patches, but they are scaly and silvery and rise up high, but under close examination, you will find the skin to be more inflamed and thicker than eczema.

The diagnosis of psoriasis in children is done through a physical examination. Doctors inspect the skin and make the diagnosis based on the observation of the affected areas.

In severe cases, a skin biopsy might be necessary to not confuse psoriasis with other similar looking skin conditions.

Assessing the severity of psoriasis aids in choosing the most appropriate method of treatment. Its severity can be assessed in the following ways:

A good dermatologist can help individuals deal with severe psoriasis. Adolescents and children with psoriasis require the help of paediatric dermatologist. Additionally, counsellors are also recommended as psoriasis can cause significant social and psychological damage to the child.

Although it cannot be cured, there are various options to manage psoriasis.

Topical therapies are ideal to treat mild and moderate psoriasis for all the children with psoriasis.

Narrowband UVB phototherapy is commonly used for children with psoriasis, especially for children over the age of 10 years. It is the perfect treatment for guttate psoriasis and plaque psoriasis as they respond best. A treatment course based in a hospital normally requires the patient to attend the treatment three times in a week for up to 12 weeks. Some hospitals offer PUVA and Broadband UVB treatment.

If topical treatments and phototherapy do not show satisfactory improvement, methotrexate tablets can be used. These are prescribed once weekly and have been proven useful. It is more extensively used in the treatment of adults than children. Various case studies have shown remarkable clinical improvement amongst two-year-old children, with remarkable tolerance. To ensure safety, regular blood tests are mandatory.

Biologic agents like itravenous infliximad and subcutaneous etanercept should be used only as a last resort. It can be used to deal with severe psoriasis in children who have not responded well to other therapies. Although they are safe they have adverse side effects like infections. Only after the consultation of a dermatologist on a case-to-case basis, should a biological agent be used.

Children with psoriasis may clear up completely, within months of diagnosis and treatment, particularly if the guttate plaques form because of an infection. It is advised to keep in mind that some children might progress to have long-term psoriasis. In many cases, the disease is life-long. Early large plaque psoriasis normally tends to be especially persistent and hence challenging to treat. It may lead to the occurrence of complications like psoriatic arthritis. Children dealing with severe psoriasis are generally advised to exercise regularly, avoid smoking and maintain a healthy weight.