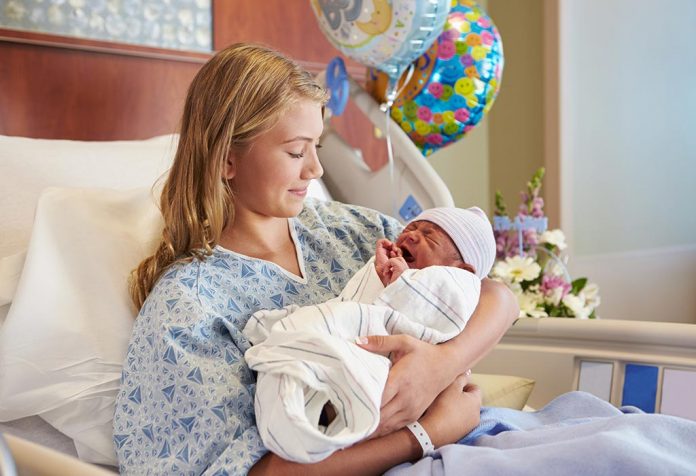 Pregnancy is an experience in itself during which a woman goes through an enormous range of changes, both physical and mental (postpartum body changes) and these changes are unique to each woman.

Giving birth to a new life is a special yet an emotionally and physically exhausting process. It requires adequate care, both during and after delivery, as a number of changes occur in the body due to fluctuations in hormonal levels. Knowledge and awareness about these can help women be adequately ready and prepared for childbirth and the changes associated with the same.

Following is a list of a few post baby body changes including physical and lifestyle changes reported in a woman’s body after delivery of a baby, which can be well countered with adequate understanding, acceptance and patience.

Sudden hair fall after delivery is quite common and this phase may last up to a year or less. This is experienced due to a sudden drop in oestrogen levels after childbirth as oestrogen levels are high during pregnancy and these levels gradually return to normal with time and the rate of hair growth normalizes to pre-pregnancy state. These changes are completely normal and there is nothing to be alarmed about. In fact any new noticeable excess facial and body hair will also shed after pregnancy. Hair loss period peaks for around the first 3-4 months after childbirth and slowly tapers down to normal.

The first milk that a mothers’ breasts makes is called ‘colostrum’ – this milk is richer, creamier and is loaded with antibodies. This ‘colostrum’ is absolutely necessary and important for the child as it strengthens the immune system and protects the child from infections. Colostrum is present in a very small amount and during this period, lactation maybe uneasy as the breasts are swollen, sore and extremely tender. Once the milk starts producing, the soreness and swelling will subside and make breastfeeding more comfortable. Sagging of breasts is commonly seen and in a few cases, mothers may also notice milk leakage for several weeks, even after discontinuation of feeding, all of which are normal.

Due to intense stretching of the pelvic floor during pregnancy, the vaginal muscles become lax and this area may feel stretched out. It may not entirely go back to how it used to be earlier as the bladder, rectum and uterus tend to drop after labor. This takes a few weeks to resolve. ‘Kegel’ exercises help in a speedy recovery process of the body changes after your baby is born.

In the postpartum period when the body shape changes after pregnancy, the excess weight gained during pregnancy which is generally about 11 kilograms is slowly lost. The body eliminates all the extra water retained during pregnancy along with extra water retained in the cells. Initially, the mother experiences unusually frequent urination and profuse sweating. Majority of the weight loss would be seen in the first week of pregnancy due to the absence amniotic fluid, placenta and the baby’s weight. Post pregnancy, a continuous and gradual weight loss is observed.

Being a parent can bring about plenty of changes in your lifestyle. The stress and fatigue brought about by the new responsibility of being a mother may not only affect your health but also your skin. Hormonal fluctuation adds to this in unexpected ways. Women with clear and glowing skin may experience more breakouts in the months following the delivery. On the other hand, women with problematic skin during pregnancy may show improvement after giving birth. Most women complain of ‘Chloasma faciei’ or ‘Melasma’ – darkened patches or zones of dark skin (along the lining of the lips, nose, cheeks and forehead). These darkened areas fade as long as the mother ensures protection of her skin from the harmful rays of the sun. Stretch marks are certain during pregnancy and can be taken care by the use of special oils and lotions. Stretch marks too tend to fade with time.

Post-delivery, the uterus remains partially contracted and relatively heavy (weighing around a kilogram) and is felt as a small round lump in the lower anterior abdomen. In about 6 weeks’ time, it will weigh only an ounce or two and will no more be palpable. Linea nigra or the ugly dark line that most women develop on the abdomen during pregnancy will fade off in a few months.

However, the pregnancy stretch marks over the abdomen persist for a longer period of time. Stretch marks develop whenever the abdomen changes drastically in size (acutely or over a period of time). These are bright red during the pregnancy, which eventually turn silver in color and shiny. Generally, most women will have some residual abdominal fat post-delivery. Basic abdominal exercises can help you regain a leaner shape.

With delivery, the maximum height of the uterus gradually lowers, which can be appreciated by external palpation. In the first few days, it measures up to the navel. By about a week, the uterus is around a pound in weight – more or less half the immediate post-delivery weight. At about two weeks, it is situated entirely within the pelvis, weighing just about eleven ounces. It soon returns to its non- pregnant size and weight that is about three and half ounces. This is known as the uterine involution.

Due to excessive stretching of the bladder muscles, new mothers’ usually experience incontinence (involuntary passing of urine) and this subsides only as the bladder muscles grow stronger. A few mothers’ may experience haemorrhoids (blood in stools), uncomfortable bowel movements or constipation, as the food moving through your intestines may slow down during delivery. Lifestyle changes – a healthy diet with plenty of fibers and getting adequate sleep help new mothers’ to deal with these issues.

One troublesome change post-delivery, probably for both the parents is the reduced urge for intimacy or sexual contact in the mother. Refuting myths, it is well documented that a drop in sex drive is always observed in new mothers – the main culprit being ‘oestrogen’ or the female hormone. Oestrogen, which is centrally regulated by the hormones LH (leutinizing hormone) and FSH (follicle stimulating hormone), maintain the sexual drive. It gradually increases during pregnancy and hits an abrupt low, post childbirth .These levels gradually normalize with time and hence isn’t much to worry about. Also contributing to the cause of a reduced sex drive are the inhibitions because of the pain in the genital region and mainly the stress and inability to manage time with the constant responsibility of the baby added.

Post-natal depression or depression following childbirth is a rather common yet underestimated and a less discussed problem. It is fairly common and has multiple causative factors like:

Post-natal depression is basically a period of transition. Mothers must make sure they give themselves time and their family must ensure that the new mother gets all the support she needs.

Pregnancy is a prolonged period of unusual and excessive strain on the abdominal as well as back muscles. Stretched abdominal muscles take a while to regain their natural tone and form. Carrying the baby’s additional weight on the back muscles leads to a constant backache till the muscles regain their normal tone. A poor posture can add up to the pain and make it worse.

The uterus contracts to shrink back to its original size after childbirth. These occasional and sudden contractions lead to bouts of pain called – after pains. These are similar or rather mild labor contractions and are more frequent during breastfeeding. This is because of the oxytocin released while breastfeeding, which in turn causes the uterus to contract.

Lochia or abnormal fluid from the vagina is common after giving birth. Lochia consists of blood, bacteria, and sloughed-off tissue from the lining of the uterus. It may initially contain blood and appear thick, resembling menstrual blood. The discharge reduces with passing days and the color of the discharge gets lighter and subsides in a matter of about two to four weeks. Intermittent spotting or ‘show’ may continue in few, even after a period of four to six weeks.

Women commonly experience certain body changes after giving birth, which may be distressing if not addressed in a patient manner. Changes can be seen in hair, skin, body weight, breasts, genitalia, abdomen and altered urinary and bowel habits. It is vital to know that these changes are physiological (natural) and are bound to return to normal in a period of four to six weeks, mostly with no active interventions or medical help. A healthy lifestyle with a balanced, nutritious diet and regular moderate exercise with yoga or aerobics can usually help deal with these body changes after childbirth.