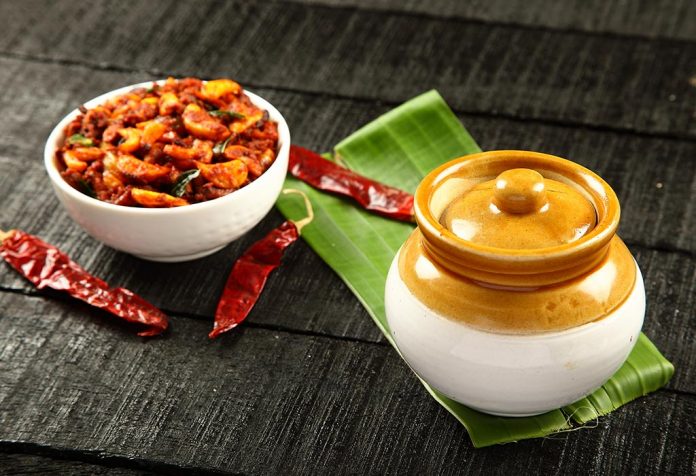 It is common to crave for certain foods during pregnancy. Sometimes, women crave for sweets such as chocolate or apples and sometimes they are for a combination of foods. Pregnancy cravings differ from women to women. The changing pregnancy hormones can also make women crave for pickles, which is a classic pregnancy craving. While in some cases, craving for pickles may satisfy their urge for spicy food, others find eating pickles useful in preventing one of the most typical pregnancy symptoms i.e., morning sickness.

The vital thing to remember here is not to give in to the craving in excess. Eating the tangy pickles on a day-to-day basis is not recommended. Eating in moderation is a wiser approach when dealing with cravings, to avoid any issues later on.

Why Do Pregnant Women Crave Pickles?

Craving pickles during pregnancy is a quintessential pregnancy stereotype, isn’t it? Some people go on to predict the gender of the baby based on the cravings of a woman during pregnancy, but there is no scientific evidence to prove the same. Women may crave for pickles for the following reasons:

The nutritional value of pickles is essentially not much. Pickles have very less cholesterol and are also very low in protein and fat. Pickles can be a good source of iron and sodium. They may also provide some calcium, dietary fibre, and vitamin C.  Every pickle may contain a different quantity of sodium, fat, and calories. So, it is important to check the product labelling detailing the nutritional facts. Although pickles by themselves don’t possess much minerals and vitamins, having pickles along with a meal can enhance the probiotic content of that meal. 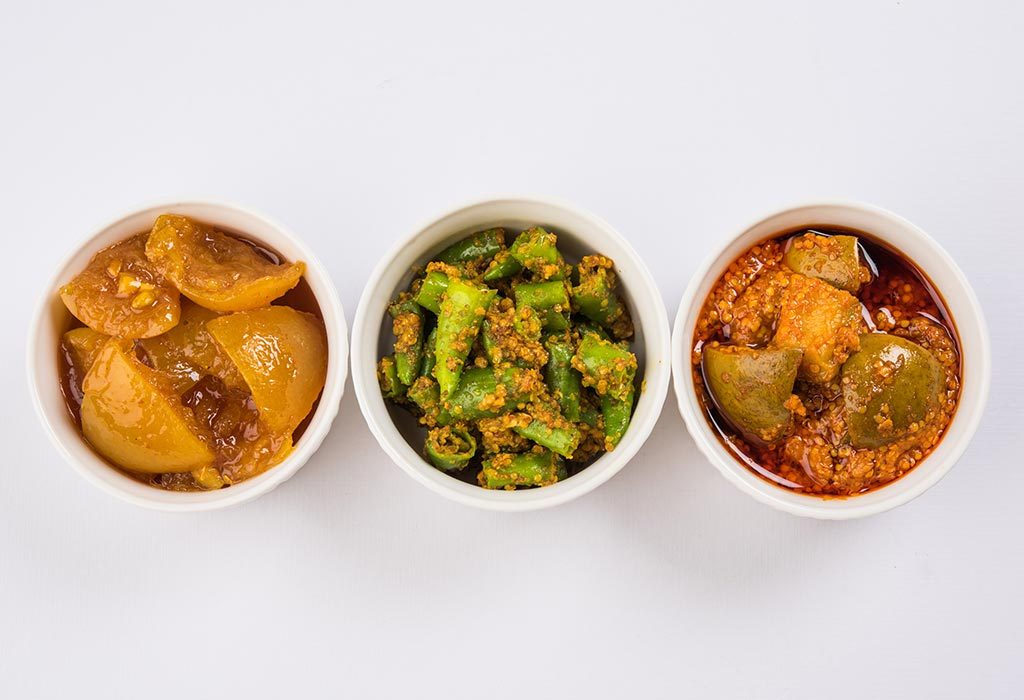 Is Consuming Pickles in Pregnancy Safe?

Consuming pickles in a limited amount during pregnancy may not be harmful. But it is not advisable to make pickles a part of your daily diet during pregnancy. Overindulgence in pickles during pregnancy can lead to certain health issues. Hence, moderating should be the key whenever you are tempted to reach for that jar of pickles! 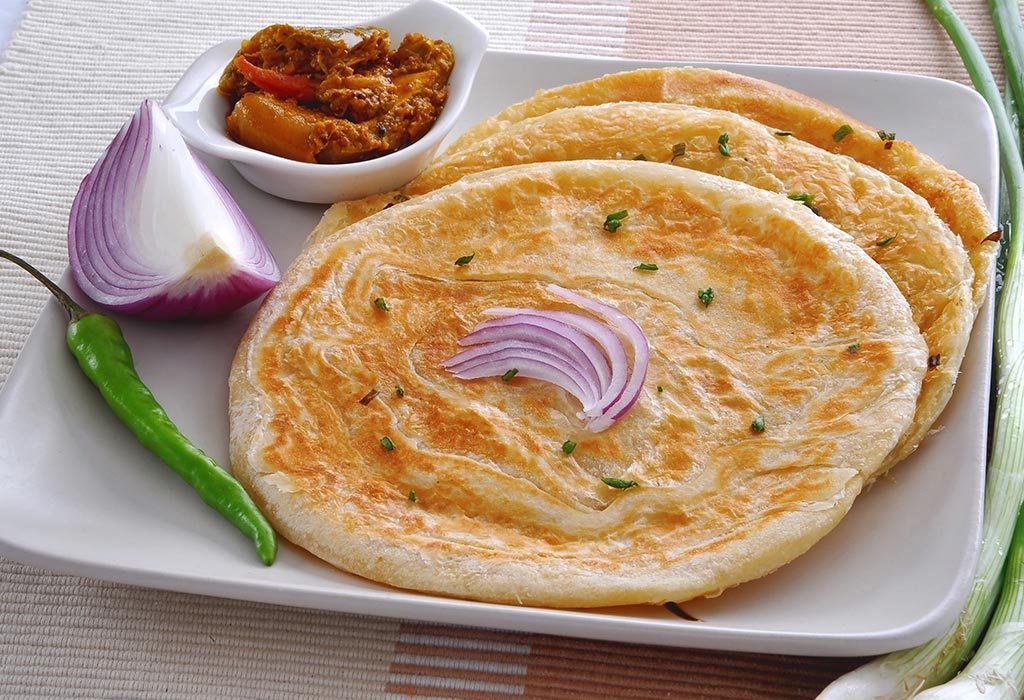 Moreover, during pregnancy, it is crucial to pay special attention to your dietary intake for your health as well as your baby’s health. Pickles don’t have much nutritional value. So, their consumption is best kept to the minimum. Further, you may also like to avoid consuming very spicy pickles. In case of any lingering doubt, it is always advisable to consult your doctor first.

Benefits of Eating Pickles During Pregnancy

It is not a stretch of the imagination for pregnant women to crave for pickles throughout their pregnancy. Eating pickles in moderation during pregnancy may prove beneficial in the following ways:

1. May Help Balance the Electrolyte Levels in the Body

Pickles are thought to improve digestion and even the immune function to some extent. Pickles may contain healthy bacteria which prevents it from getting spoiled. So eating pickles can aid in multiplying the good bacteria in your digestive system, which can help in combating a lot of digestive issues.

Pickles are believed to have antioxidant properties in them. The pickled fruits or vegetables are usually not cooked, which preserves their antioxidants. These antioxidants can thus help in defending your body against free radicals.

4. May Strengthen Your Immune System

Having fresh pickles of various vegetables and fruits such as amla may provide your body with essential vitamins like vitamin A, C, and K, and minerals like calcium, iron, and potassium. These vitamins and minerals can strengthen your immune system and lower your risk of falling prey to diseases during pregnancy.

Risk of Consuming Pickles When Pregnant

Nearly all pickles are high in salt content. Salt is added to pickles because it enhances the taste and functions as an anti-microbial agent, aiding in the preservation of pickles by keeping off undesirable fungi, yeast, and bacteria. However, excess intake of salt through pickles during pregnancy can lead to gestational hypertension, which can result in heart attacks and strokes. 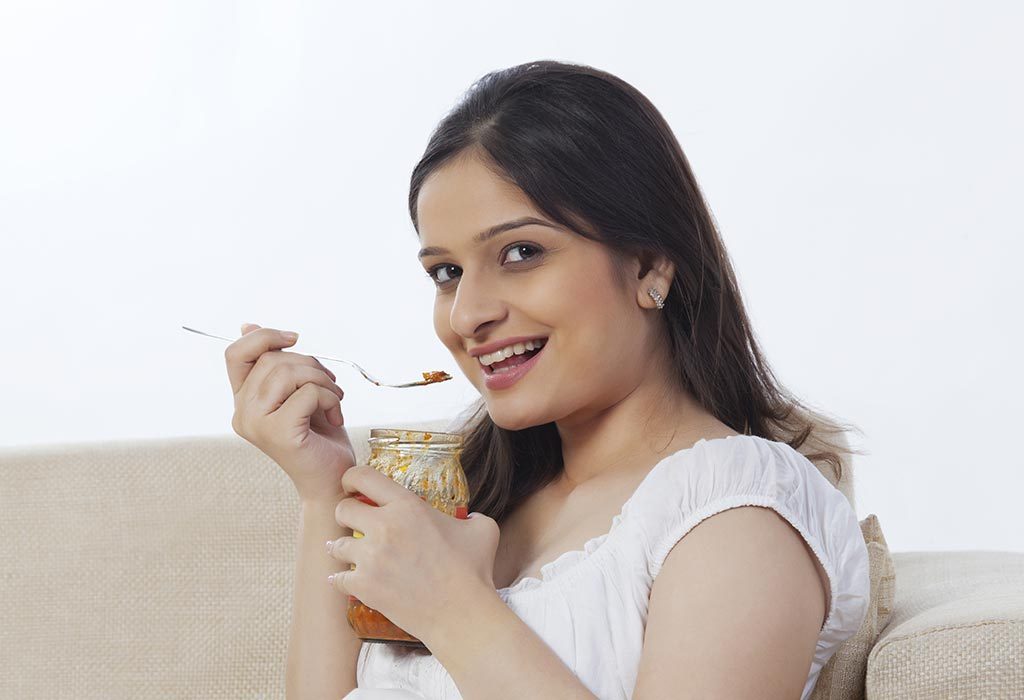 Furthermore, most Indian pickles contain oil in excess, which can increase cholesterol levels and fat content in the body during pregnancy. Eating very spicy pickles or pickles with chemical preservatives can even cause bloating or gas when pregnant.

Precautions to Take While Eating Pickles

Pickles and pregnancy may not be completely conducive. Some of the precautions that you may like to observe if craving pickles while pregnant are:

If you do want to eat pickles during pregnancy, remember moderation is the key. Giving in to cravings once in a while is not harmful but don’t overdo it. Pickles, if consumed in small quantities, may offer some benefit but if consumed in excess may lead to health complications. Furthermore, if you are buying pickles from the market, choose the organic variety devoid of chemical preservatives. And do consult your doctor before including any pickle in your diet.