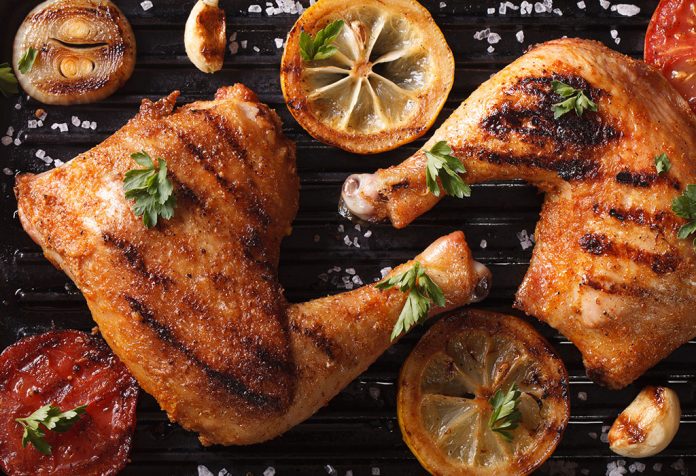 During pregnancy, it is important to ensure a balanced diet for the well-being of the mother as well as the baby. There are many physical changes which take place in the body during pregnancy. Additionally, there are different hormones which are released during this phase. It is therefore essential to know what food items can be included in the diet and what should be avoided. Chicken is one of the food items which is recommended to be consumed by a pregnant woman as it is a good source of protein and provides other essential vitamins and minerals.

Is It Safe to Eat Chicken in Pregnancy?

Chicken is a highly nutritious food which packs proteins along with nine essential amino acids, both of which are building blocks of the muscle. Chicken has low-fat content and does not cause obesity making it a rich source of necessary nutrients for a pregnant woman.

It is important that the chicken consumed by pregnant women is well-cooked. Raw, uncooked chicken should be avoided as it can be contaminated by a bacteria called Listeria. Heating the chicken above 160 degrees Fahrenheit can kill the Listeria bacteria making the chicken safe for consumption.

Benefits of Eating Chicken while Pregnant

Chicken is packed with lean proteins and other vitamins and minerals. Eating chicken during early pregnancy will provide necessary nourishment to aid the healthy development of the child in the womb.

Following are some more benefits of eating chicken while pregnant:

These minerals and nutrients assist in the development of organs, cells, and bones of the baby. It provides protection from chronic illnesses such as diabetes, cholesterol and heart ailments.

100 grams of cooked chicken meat is the recommended daily intake for a pregnant woman.

Chicken does not have any harmful substance or mineral which is not suitable for a pregnant woman and is considered to be a safe food during pregnancy.

The only risk associated with chicken is because of the infection causing bacteria Listeria. This is found in contaminated chicken and causes an infection known as Listeriosis. Listeriosis in pregnant women increases the risk of preterm delivery, miscarriages, infection in the newborn or even premature death. As per studies, 22% of pre-natal listeriosis cases result in neonatal deaths.

The cases of listeria infection in a pregnant woman are not common. However, pregnant women are more prone to any disease or infection than normal women.

This bacteria cannot survive in temperatures higher than 160 degrees Fahrenheit. That is why it is advised to cook the chicken above this temperature before eating it to eliminate the bacteria. A pregnant woman should only consume well-cooked chicken and avoid consumption of raw or semi-cooked chicken.

Mothers-to-be should also avoid deli meat which is used in the preparation of sandwiches, burgers and other instant food items. This is because there are high chances of contamination of chicken at the time of processing of deli meat.

It is advised to consult your doctor before deciding to include any food item in the dietary plan at the time of pregnancy.