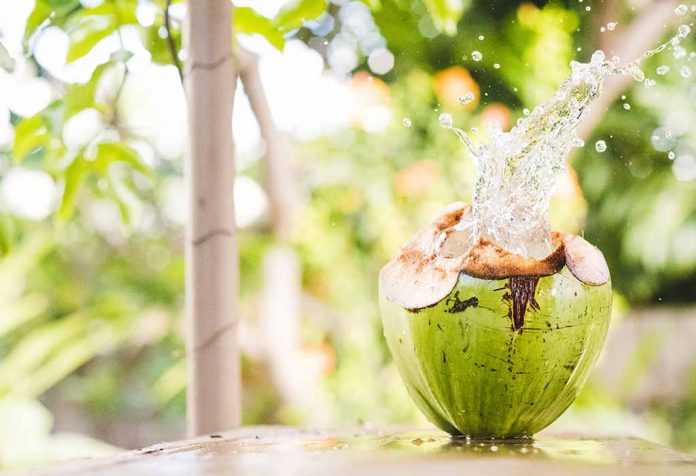 Coconut water has been consumed for centuries in tropical countries where it is grown in abundance and is known to possess medicinal properties. It is often recommended as a refreshing drink to the aged or infirm and accepted as a natural drink that has a soothing effect. In pregnant women it helps in regulating digestive tracts, relieving morning sickness, constipation and more. Health conscious individuals also prefer coconut water as it does not contain any cholesterol.

Pregnancy demands a switch to a healthy diet, which also means leaving behind artificially packed drinks that have high sugar content, which isn’t ideal for the baby. Coconut water can be a great, healthy alternative drink that is both nutritious and flavourful.

Is it Safe to Have Coconut Water During Pregnancy?

The best time to drink coconut water during pregnancy is in the morning as the nutrients and electrolytes it contains are easily absorbed on an empty stomach. Since the drink is high in calories, women who have a tendency to add weight should be cautious. As it is also considered to be a diuretic pregnant women might need to make more frequent visits to the restroom. It is rich in potassium, sodium dietary fibre, moderate sugar, vitamins and protein. Women who are under medication for high blood pressure should be careful as coconut water may result in low blood levels. It has been found to assist in countering dehydration due to morning sickness during initial period of pregnancy.

Due to its high fiber content, a glass of coconut water in the mornings can help ease constipation. During the latter half of the pregnancy it can also be of assistance in tackling blood pressure as it is rich in potassium.

From time immemorial positive correlations have been drawn between health and coconut water. It is not only a balanced nutritive drink but also very refreshing. Working women who have little time to pay attention to their needs during pregnancy can compensate by drinking a glass of fresh coconut water every day, as the nutritional value of coconut will compensate the tiredness and lethargy.

It is a great natural drink which is rich in vitamins, electrolytes and minerals. Thirst can be effectively alleviated by a soothing drink of coconut water. Researchers have established that coconut water is an effective re-hydration aid. This, however, does not imply that other healthy food should be restricted. A balance between nutrients and nourishment should always be kept in mind.

Coconut water is a cholesterol-free drink and can be had anytime. The health benefits of coconut water for pregnant women are immense.

To a enjoy the benefits of this drink, it should be consumed immediately after it is cut. A word of advice from the doctor is always recommended before adding coconut water to the diet.

Are There Any Side Effects of Drinking Coconut Water during Pregnancy?

Generally coconut water does not harm a majority of pregnant women. However, it should be taken in moderate doses as coconut milk contains sodium which should be avoided if a pregnant woman is suffering from high blood pressure and is under medication for it.

It is always recommended to consume tender coconut water while the pregnancy period approaches the third trimester as the body requires essential nutrients in this period. Coconuts are best consumed once they are cut, as they are ripe with nutrients when they are fresh. It should be borne in mind that a ripe coconut can be harmful as it leads to constipation and has a tendency of increasing fat in the body.

Precaution should be exercised by restricting the intake to one glass per day to prevent overdose of sodium or potassium. As coconut water has diuretic effect it may cause uneasiness in pregnant women as the urge to relieve themselves increases. Some surgeons may recommend that you stop drinking coconut water two weeks before surgery. This is because it may interfere with blood pressure control pre and post surgery.

Despite the fact that health conscious people have endorsed the advantages of coconut water there are a few myths about consuming coconut water during pregnancy.

How Much Coconut Water Should You Drink while Pregnant?

The quantity of coconut water to be consumed during pregnancy is debatable. The ideal consumption quantity should be limited to one glass per day. This quantity is ideal for a pregnant woman and can provide the essential daily nutrients.

It is best to avoid coconut water if you dislike the taste to prevent vomiting or any uneasy feeling.

Why Does the Taste of Coconut Water Differ?

Very often the taste of coconut water differs in each fruit. The taste may also differ from region to region. Organically grown ones also tend to differ in taste compared to the ones grown with the help of fertilizers. There are three different varieties which are widely known and they are, the tall variety, dwarf variety, and the hybrid variety. The taste of water of the tall variety with thin pulp is sweeter than other varieties.

The hybrid varieties may not have the same sweet taste. The taste of dwarf variety is sweet but lacks the properties that the tall variety has. The taste may also differ if it has not been consumed immediately, as it gets fermented due to exposure to the sun.

How Do I Choose the Right Coconut?

In order to enjoy the water in the coconut, it is best to choose the green variety of coconut. It contains water which is sweet and is laden with quality nutrients that are essential. In order to get value for the money it is best to shake the coconut which will give you an idea of the water content. While choosing a coconut ensure that it is green, has no brown rims and is not damaged. If the coconut is cut, stored and then offered it will contain more of pulp and less of water. The pulp may not be suitable for pregnant women due to high content of potassium and sodium. It has been observed that coconut from a tree which has aged between five and seven months are tasty and full of nutrients.

Quality also depends on the distance from the sea shore and the salinity of the soil. Weather conditions determine the quantity and quality of coconut water. It is always advisable to consume the whole coconut immediately as the water, when preserved, will ferment and have a sour taste with a pungent smell.

With its subtle flavour, soothing effect, and power pack of nutrients, coconut water is a great choice of drink for a pregnant woman. Like any other food or drink however, it should be consumed in moderation, so that you may avail the benefits without the fear of any serious side-effects on you or your baby.