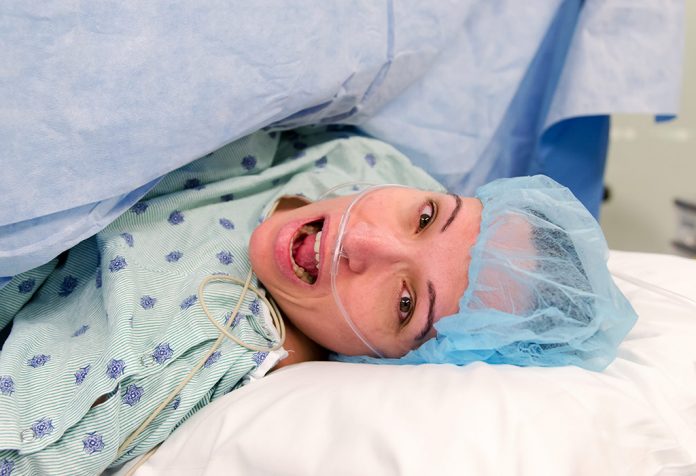 Blood loss is unavoidable during and after childbirth, more so during a C-section. However, although some bleeding is normal, it helps to know what to expect, and when the bleeding after C-section requires a doctor’s attention.

In case the bleeding does not reduce after the first few weeks you should consult the doctor.

What Are the Causes of Bleeding After Caesarean Delivery?

1. Severed Blood Vessels – During C-section there are lacerations made which cause bleeding. In some cases, the initial incision is not wide enough for the baby to exit, and this causes the tissues and blood vessels around this area to get severed while the baby is being taken out. Sometimes bleeding occurs because some of the arteries and veins around the uterus are accidentally cut during the procedure.

2. Uterine Atony – Uterine atony is another cause of bleeding after C-section. It occurs when the woman’s uterus does not contract after the placenta is expelled following the birth of the baby. The blood vessels are closed by the uterine contractions which prevent the area around the placenta from bleeding, once the placenta is expelled through the vagina. When the uterus does not contract after delivery it remains open resulting in heavy bleeding.

3. Placenta Fragments – Some women experience heavy bleeding when the fragments from the placenta remain inside the uterus. This is common in women who have had multiple C-sections.

4. Placenta Accreta – This is a common cause of bleeding. In this case, the bleeding happens because the placenta does not separate naturally from the uterus as it is deeply embedded. Woman who have placenta accreta have the risk of haemorrhaging because the doctor has to manually remove the placenta.

After a Caesarean delivery, the bleeding will last for about 6 weeks.

Some Common Signs Are

A rapid heartbeat and gasping breathing are a sign of internal bleeding.

Post C-section if the uterus loses its form and becomes boggy or flabby then internal bleeding may be the cause for it.

A lot of women experiencing internal bleeding may complain of weakness and severe anxiety.

Internal bleeding can make the woman’s face pale and her hands and feet cold.

If your bleeding continues to be heavy even after the initial few weeks, it could be due to internal bleeding.

If the blood reaching the kidneys is less, then it affects the urine output. Thus reduced urine output may be a sign of internal bleeding

How Much Bleeding Merits Medical Attention?

If your bleeding becomes heavy again after tapering off and the colour turns red it may be due to overexertion. However, if clotting continues even after resting for few days then it might be due to some complication.

You should consult your doctor immediately if:

Simple ways to manage the heavy flow post C-section are:

Use Pads – Not Tampons

During this time you should use old panties and clothes which can be disposed of later. You might get stains from bleeding which are difficult to remove.

You should keep a stock of maternity pads because you will need lots of them after the delivery.

Since you are bleeding heavily complete bed rest is advised in the initial weeks.

Get Help Around the House

You may ask for support from your family members or hire professional help.

If there is still heavy bleeding after C-section then you need to consult your doctor. The treatment will depend on the source of the bleeding, at which stage it started and the seriousness. Hence it is important to give a complete medical history to your doctor.

If your uterus has not begun to contract after the delivery, then your doctor may give you medication to stimulate contractions.

If bleeding does not stop you may go for some additional surgery.

In some cases, hysterectomy is done to prevent blood loss.

Conclusion – Adequate post-natal care is important, not only to make sure that you get back to a normal life as soon as possible, but also because your baby needs your care and complete attention in the first few months of her life. Make sure you take it easy and avoid overexerting to avoid complications, and do see a doctor if you notice any signs of ill-health.