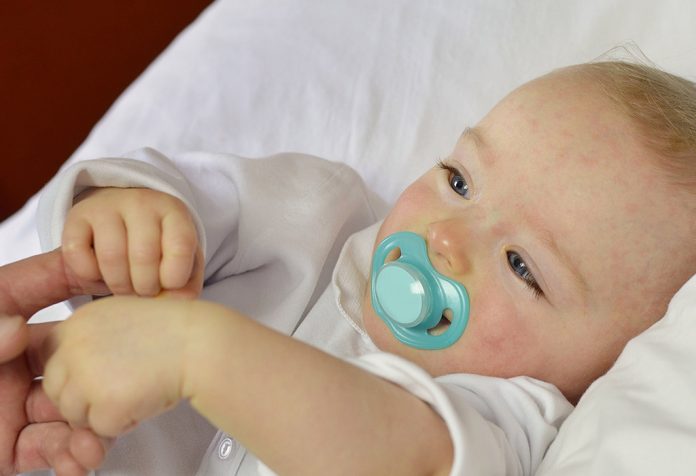 Roseola, or sixth disease as it is also known, is a highly infectious disease that affects many babies at some point in time or the other. This disease has been known to affect adults as well, though the number of reported cases is lower. It is common in babies and is generally mild and easily treatable.

This infection usually lasts anywhere between 3 to 5 days. The most common signs include a well-spread reddish rash, generally all over the body, as well as high fever.

As discussed above, sixth disease or roseola is a highly infectious disease that’s commonly found in babies anywhere between the age group of 9 months up to 5 years. This infectious, though mild disease, stems from the same virus as herpes. The type is generally Human Herpes Virus 6 or Human Herpes Virus 7.

The most common ways in which roseola can be contracted in infants is either through the mother during pregnancy or through the saliva of the infant. The presence of roseola is confirmed either by symptoms such as high fever and rashes or sometimes through blood tests.

What Causes Roseola In Babies And Toddlers?

What are the Symptoms of Roseola?

The most common symptoms of roseola in babies are fever and pinkish or reddish rashes. Roseola generally lasts for anywhere between 3 to 5 days. The first sign is usually a high fever (often up to 103 F) that is sudden and generally weakening.

The aftermath of this sudden high fever is the infamous rash that can appear throughout the body or in certain areas. The rash, red or pink in colour, may take time to subside. Commonly, the onset of the rash is seen on the chest that steadily progresses to the child’s abdomen and back, and finally to the arms and neck.

In many cases reported, symptoms of roseola have been seen to be absolutely different. When it’s said different, it generally means absent! Fever and roseola rash, the common symptoms determining this infection, may sometimes not show at all, making it harder to diagnose the disease.

Be on the lookout for roseola if your baby has been exposed to the germs contained in another child. The other tell-tale signs, in case the high fever or rash do not manifest, include a runny nose, sore throat, increased irritation in kids, cough, swollen lymph nodes, lack of appetite, and a mild case of diarrhoea.

In worst case scenarios, your infected child can have fever fits or, as medically known, febrile seizures. Seek medical help immediately if roseola reaches this level of severity.

What are the available treatments for Roseola?

Since there is no specific way in which babies with roseola can be treated, it is best for the disease to subside on its own.

Nevertheless, since your baby will most certainly be cranky and weak with the symptoms, it is up to you to make the baby as comfortable as possible.

How Long Does Roseola Rash Last?

Though there is no fixed time till when the rash lasts, mothers can expect the rash to subside within 7 to 10 days. Of course, the sensitivity of the skin, as well as the usual level of treatment, determines the course of how long the rash lasts.

Yes. Roseola may or may not to be harmful, but this is a highly contagious disease. The common ways the disease can be contracted include exposure to contaminated surfaces, skin to skin contact, saliva, as well as respiratory secretions.

What is the Incubation Period?

The incubation period for roseola generally varies from baby to baby. Nevertheless, most studies show that roseola infantum incubation period can last up to 14 days in worst cases, while mild cases can last anywhere from 5 to 7 days.

How Can Roseola Infantum be Prevented?

Roseola is one of those rare diseases that can neither be cured with set medication nor does it have any form of vaccination that can help prevent the contraction of the virus. Nevertheless, basic precaution may go a long way to avoid the virus.

For one, ensure that your baby is not exposed to children already suffering from roseola. In case your baby has contracted the virus, keep them away from harsh environmental conditions as it might damage the immunity further. Practising healthy habits for the entire household can help curtail the virus.

When To Call The Doctor

Calling a doctor at the earliest sign of roseola infection is always a good option. Watch out for the onset of the following signs:

A common ailment among children, roseola does not normally pose a serious risk. However, it is important to monitor the child carefully, and seek a doctor’s opinion if the symptoms intensify.