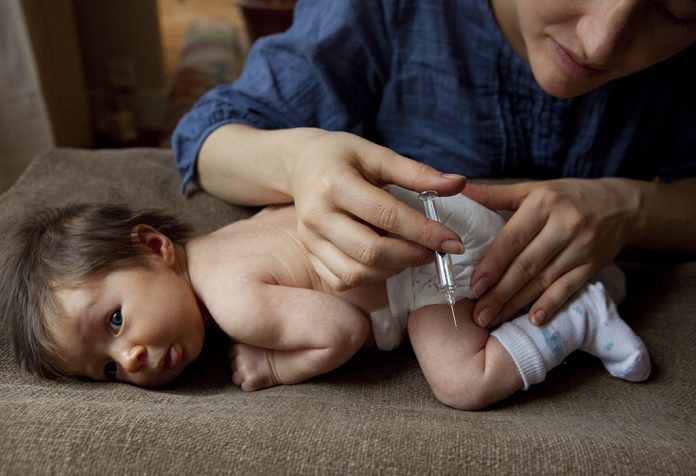 Pneumococcal bacteria cause serious diseases such as pneumonia and meningitis which develop within a span of few days of getting infected. This bacteria also cause serious ear infections in kids. The pneumococcal vaccine fights against multiple strains of these diseases causing bacteria. In the year 2010, the vaccine PCV13 was introduced, which fights against a greater number of these bacterial strains as compared to the previous vaccine. Let us have a look at these vaccines and when to receive the shots.

What is Pneumococcal Vaccine?

A pneumococcal vaccine is a vaccine that protects children against a harmful infection called the pneumococcal disease.

This disease is caused by the Streptococcus pneumoniae bacteria. This bacteria either infects the people or resides in the throat of a person without causing any illness to him. These carriers will spread, despite not infecting the person carrying them, via the tiny droplets from their mouth or nose during breathing, coughing or sneezing. This bacteria causes infection in the middle ear, sinus cavities and the respiratory tract. Pneumonia injection for babies is being administered today to avoid these infections.

Why It is Essential for a Child to Get This Vaccine

It is recommended for all kids below the age of 2 years as well as adults older than 65 years of age to get the pneumococcal vaccine. Children are susceptible to harmful ear infections when affected by the pneumococcal bacteria. Diseases such as pneumonia and meningitis can develop within the affected host within a few days of being infected. It is thus essential for a child to get this vaccine.

Who Should Have Pneumococcal Vaccine?

Older adults above the age of 65 years need to take this vaccine. With age, the immune system does not function as well as it used to and it becomes increasingly difficult to ward off the infections.

Those who smoke and drink heavily need to take this vaccine. Long-term smokers will have damaged the inner lining of the lungs. This inner lining of small hairs is the preventative tool for the germs and will not be effective when damaged. Those who drink heavily will have an immune system that is weakened. The white blood cells that defend against any infection will not function as effectively as in a person with a strong and healthy defence system.

Those who are recovering from some severe illness or surgery need to take this vaccine. At this stage, the immune system is busy helping you recover and it cannot be efficient in fighting off any other infections.

Who Should Not Have PCV Vaccine?

It is not required for every single person to have the PCV vaccine. An adult who is healthy and within the age group of 18 to 64 years can skip this vaccine. People who are allergic to the contents of this vaccine should also not take it. Consult a doctor for the same.

What Are the Recommended Doses and Schedule for Pneumococcal Vaccine for Babies?

This vaccine is recommended to be administered in series for young children and infants. The series consists of three doses, each taken at the ages of eight weeks, sixteen weeks, and twelve to fifteen months. Even if the babies have missed any of these shots, it is imperative to administer the vaccine to them. It is advised to consult with a doctor to confirm regarding the dosage interval and number.

How Often is the Vaccine Given to Babies?

The vaccine is administered three times to the babies at a scheduled interval. This is administered at the ages of eight weeks, sixteen weeks, and twelve to fifteen months.

What Are the Types of the Pneumococcal Vaccine?

There are two different types of pneumococcal vaccine, which are administered depending on the person’s age as well as the health.

Children above the age of 2 years can be administered with the PPV vaccine, if they are susceptible to the infection, although it is rare that the vaccine does not work on the babies. PCV1 vaccine for infants do not work against all the types of pneumonia-causing bacteria, but they ward off 30 or more severe and common types.

How is the Vaccine Given?

PPV is administered subcutaneously or intramuscularly and the PCV is given intramuscularly. The site of injection for babies and young children is in the anterolateral thigh region specifically in the vastus lateralis muscle. The site of injection for adults is the deltoid muscle in the shoulder region. The needle length is chosen depending on the age of the person who is receiving the shot.

How Well do PCV Vaccines Works

The PCV vaccine is said to be 50-70% efficient in preventing the pneumococcal infection.

Side Effects of Pneumococcal vaccine in Babies

As in the case of almost all the vaccines, the pneumococcal vaccine also causes side effects which are mild. These side effects include:

Other than minor allergic reactions, no major side effects occur upon taking this vaccine.

What to Do if Your Child Has a Reaction to the Vaccine?

Call your doctor or take your child to the hospital immediately. Inform the doctor regarding the details of the vaccination and the allergic reaction. Look for any such reaction for a few hours after the administration of the vaccine. These extreme allergic reactions tend to occur within minutes to a few hours after being vaccinated. You can check for weakness, fast heartbeat, dizziness, difficulty in breathing, wheezing or hoarseness, hives and, swelling of the throat.

What to Do If One Pneumococcal Vaccine is Missed?

When to Use Booster Doses of the Pneumococcal Vaccine?

Pneumococcal infections used to cause about thirteen thousand blood infections, greater than seven hundred meningitis cases, and nearly five million cases of ear infections in kids lesser than 5 years of age, every year. These statistics are according to the U.S Centers for Disease Control (CDC) and before the times of pneumococcal vaccination. Today, this vaccine is highly effective in preventing the disease in more than 90% of the population who are susceptible to it. Effective Ways to Remove Splinters from Your Child’s Skin

How to Soothe an Overtired Baby?

How Many Times to Have Sex in a Day to Get Pregnant?