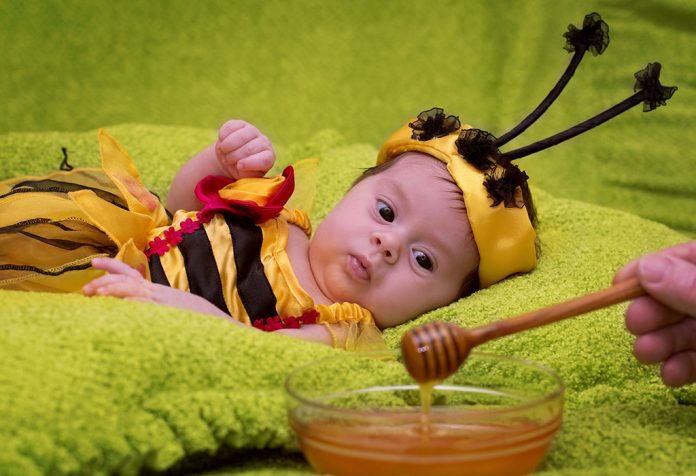 Who doesn’t love honey? An age-old treat for kids and adults alike, honey elevates moods and is a prescription for joyous occasions. Sometimes a little bit can be a little too much based on your little one’s age and immunity. Although safe for adults, honey can lead to serious implications and in severe cases, lead to death, when given to your baby.

A powerhouse of vitamins and minerals, a small dose of honey can cause a whole world of damage if not consumed with the coming of right age. Honey is ideal for toddlers and children, however, affects babies with emerging teeth which is why most doctors do not recommend giving honey to babies between 3 to 6 months of age.

Why Can’t a Baby Under 1 Year Eat Honey?

Honey occasionally contains a spore of a bacterium known as the Clostridium botulinum. This causes a rare form of food poisoning in babies, symptoms of which come to light around eight to thirty-six hours after consumption. Honey can also damage a baby’s emerging teeth which is why a baby’s age is an important criterion to consider before allowing him/her to consume honey.

The botulinum bacteria is abundantly found in the soil and releases its spores which contaminate honey and other substances. Heating, boiling, pressure-cooking, or pasteurizing does not eliminate these spores as they go unaffected and contaminate the honey. Although the adult human body and children do not get affected, babies aged 12 months and below are the victims since they have immunocompromised systems and are developing.

What is Infant Botulism

Infant Botulism is a condition which causes muscle weakness and breathing issues in babies. Infant Botulism results from toxins that are produced inside the body once a baby ingests bacteria through food sources. The most common source of infant botulism is honey which contains bacterium spores that result in this condition. A baby contracts infant botulism once he/she consumes foods in which the bacterium has released the botulism toxins. Infant botulism can result from substances besides honey as spores from the Botulinum bacteria can land in other foods and substances from the environment. It is advised to limit outdoor exposure to babies, especially near soils.

When Can Babies Have Honey

Babies can begin consuming honey once their first set of teeth emerges completely. Paediatrician recommendations state that babies can consume honey once they cross the 12-month mark and are over a year old. Babies are prone to the illnesses caused by spores of bacteria especially between the ages of three to six months which affects them due to their underdeveloped immune systems. Although honey can be consumed by children and adults, special care needs to be taken when it comes to babies and it is best that they shouldn’t be given honey until their immune systems develop wholly. Consumption of pasteurized honey for babies over 12 months old and below is also not recommended.

What are the Benefits of Honey for Babies

Although infant botulism affects babies aged below 1 year, honey is safe for consumption by babies over 18 months old. The following are the most noted benefits of honey for babies aged 18 months and above:

What if Honey is Accidentally Given to Your Baby?

If honey is accidentally given to your baby, then:

Is it Safe to Use Honey Pacifiers?

Not really! The fundamental fact about hiney applies here too, which basically implies that any amount of honey can be dangerous for a baby below 12 months of age. There is a possible scenario of honey ingestion through the tiny hole present in the pacifier which can pose a risk to your baby’s health.

Honey can be used as a medicinal supplement for treating coughs and infections. It cleanses the digestive tract and can be served with porridge and fruits. Tummy conditions like diarrhoea can be prevented by honey. Honey is used in baked products and can be served even raw to kids aged two and above or those with fully developed immune systems.

As a precaution, never serve honey to a newborn baby or infants aged 12 months and below. Infants above the age of 18 months are typically safe from the effects of the botulism spores and can be given honey in any form.

Honey for Your Baby’s Cough

Infants and babies above the age of two may be allergic to honey due to pollen allergens being present in it. Children with weak digestive systems are also prone to this which is why buying pasteurized honey from a certified brand is important before serving.

1. Can Babies Eat Baked Products Made of Honey?

According to the American Academy of Paediatrics and the World Health Organization, it is advised not to add honey (raw or pasteurized) to food, baked products, or formulae for babies under 12 months of age. Thus, it is advisable to not allow babies to eat baked products made from honey.

2. Are Molasses & Corn Syrup Safe for Babies Under 12 Months?

Can honey be given to babies is a question that’s only answered with age. When administering honey in meals or as a supplement, consider your baby’s age and the condition of their immune system. It is best to consult a paediatrician before including honey in a baby’s diet. Instead, focus on foods which can be substituted for honey. Please consult with a certified paediatrician and nutritionist regarding your baby’s dietary requirements and learn more about the foods which must be avoided by infants aged 1 year and below.