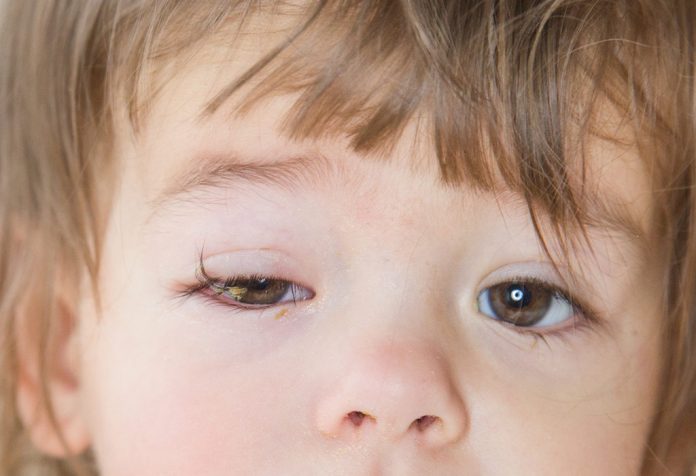 Conjunctivitis, also known as Pink Eye, is an eye infection that occurs commonly in children and adults. As the name suggests, the infection turns the white of the eye, pink or red. When caused by bacteria or viruses, it is very contagious and can spread quickly among the children.

This is an inflammation of the conjunctiva, the white part of the eye and the inner membrane of the eyelids caused by an infection or an allergic reaction. The infection can be triggered by bacteria or virus and although it might look bad, it’s usually not serious in most of the babies. When babies contract Conjunctivitis, the blood vessels in the white portion of the eye become inflamed causing it to have a red or pink appearance. It is also accompanied by symptoms of itchiness with a burning and gritty feeling and may also have a discharge.

What Are the Types of Conjunctivitis?

There are four main types of Conjunctivitis:

A common misconception is that that Pink Eye spreads just by looking at another person who has the infection. It is not true. Pink Eye spreads only when kids come in contact with an infected person.

Conjunctivitis is contagious only when caused by a microorganism, their contagious period ends when the course of medication ends and there are no symptoms present any longer.

Bacterial Conjunctivitis is also highly contagious and spreads easily through touch and sharing objects such as toys with another infected child.

Allergic Conjunctivitis is specific to each child and the substances they are allergic to. It does not spread like the bacterial and viral type.

Conjunctivitis occurs when the causative microorganism, the allergen or the chemical irritant comes in contact with the eyes. When kids touch their eyes or nose with dirty fingers contaminated with the causative agent, the infection immediately occurs. In case of bacterial and viral infections, it is mainly spread through the following mechanisms:

Conjunctivitis has clear symptoms that can be seen such as:

Conjunctivitis can be diagnosed by its symptoms and the paediatrician can discern the exact cause. Since there are other conditions such as hay fever which has similar symptoms, it is important to see the paediatrician as soon as possible.

Treatment depends on the type of Conjunctivitis and the severity of the infection. Sometimes the Pink Eye clears up on its own in a few days.

Conjunctivitis can cause complications in newborns less than a month old. Conjunctivitis most often is due to the underdeveloped tear ducts in newborns, but they can occasionally be serious when caused by an STD from the mother. Call your doctor right away in such an instance.

In children, a doctor should be consulted immediately if:

Can Your Kid With Pink Eye Go to Daycare?

It’s best not to send a kid with a Pink Eye to the daycare as the chance of an outbreak is high. Even when the Conjunctivitis is allergic, the daycare’s policy may not allow your child to attend if he has symptoms of an active infection. It is a definite no if your child has viral or bacterial Conjunctivitis.

Although it looks worrying, Pink Eye is not a serious infection in children. With good hygiene and preventive methods, it is possible to reduce the chances of an infection.