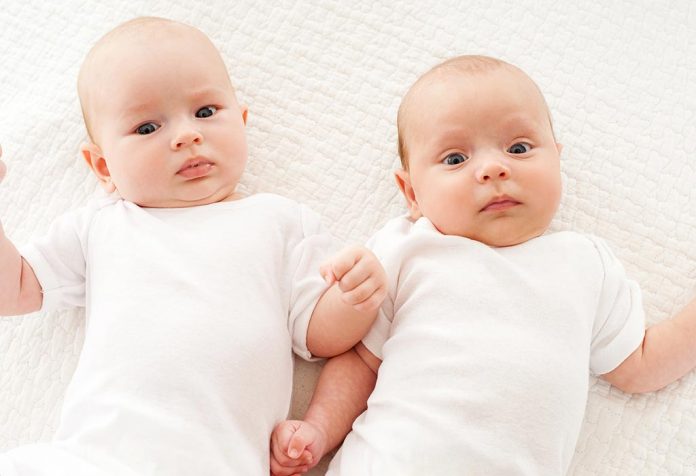 Breastfeeding twins is usually a worry for most moms to be, since they worry whether they will have enough milk to feed both the babies. However, there are very few mothers who do not have enough milk to feed their twins since milk production works on the principle of demand and supply. The extra stimulation by two or more babies sucking, results into your body  producing the milk they need. When the baby sucks at the breast, two hormones are released- PROLACTIN (which simulates more milk production) and OXYTOCIN (which releases the milk from the breast). This release is called the ‘let down’ or milk ejection reflex. This is an important mechanism with which milk is made available to the babies.

Can a Woman Produce Enough Breast Milk for Twins?

Yes, a woman can produce enough milk each time she breastfeeds her twins since the body works on a demand and supply basis. Knowing how breastfeeding works will help you understand how this is possible. Going forward, the knowledge gives one the confidence to continue breastfeeding when such a situation arises even when your babies are demanding and you as well as others begin to question your milk supply. This continuous demand for milk, in turn, increases the supply of milk in the mother.

What to Do for Producing Enough Milk?

There may be instances where you feel as though you do not have enough milk to give to your baby. You might feel this way if your baby isn’t gaining weight or if your nipples feel sore by the time you’ve finished feeding. Here are a few techniques that you could use to increase your milk supply:

Below are some of the advantages of breastfeeding:

Do You Need to Stick to a Breast Feeding Routine With Your Twins?

The breastfeeding twins schedule should be according to the demand of the babies; that is, you should feed the babies when they want to be fed. However, during growth spurts in babies at approximately 7-10 days, 2-3 weeks, 4-6 weeks,3 months, 4 months, 6 months and 9 months, early nap waking and increased night waking due to hunger, is seen. During these times, the mother should allow the babies to feed more. This helps the babies to sustain themselves.

Apart from these periods, whenever the baby wakes up early, the mother should treat this as a signal that the baby is hungry and him/her. In case you suspect a low supply of milk, you should feed the child after every two hours during the day.

Feeding Twins Together or One at a Time

Initially, for new mothers, it is easy to breastfeed one baby at a time. However, once you get the hang of it, you can feed both the babies together. Letting both your kids drink milk simultaneously is quicker and allows the mother to get time to sleep, focus on chores or do some other work. Since both your twins are different individuals, one may need more milk than the other. This means that there will be instances where you would eventually feed only one of your twins

Positions for Feeding Twins Together

There are several positions to breastfeed twins at the same time. However, one must choose the correct position- one which is comfortable and which enables the correct latch for the babies. Here are a few positions to choose from:

How to breastfeed twins is a frequently asked question. Nursing twins, especially for first-time mothers can be hard and cumbersome at the same time. Getting mentally prepared to nurse twins and to relax is the foremost thing to do before starting. Here are a few tips to help you along

Usually, first-time mothers, especially mothers of twins, are anxious when it comes to breastfeeding. They have a lot of questions regarding nursing their babies as twins can seem like double trouble. Below, we have curated some of the most commonly asked questions by parents around the world who have to deal with twins.

They both roughly take the same time provided that both breasts are utilised for breastfeeding. The only difference is that after breastfeeding, once the babies are done, you are done too, but in case of bottle feeding, you must take into consideration the amount of time it takes to clean and sterilise the bottle and to prepare the formula.

It is perfectly fine to combine breastfeeding with bottle feeding using formula milk or expressed milk. It especially works well for mothers when they go back to work and have trouble pumping milk every day. However, it is advisable to nurse your baby as much as possible, even if it is once or twice a day. Although formula milk provides all the nutrients, it lacks the unique antibodies that only mother’s milk contains

You can absolutely breastfeed your babies even if they are in special care or NICU. You can feed your baby from a bottle, a feeding tube or an IV since mother’s milk has antibodies which help the babies to grow and develop.

Breastfeeding twins or more than one baby does not make you more likely to sore nipples. Soreness in the nipple is caused chiefly by incorrect latching on or positioning of the babies. Therefore, you should take a nurse or a midwife’s help initially to learn the correct method of positioning your baby correctly before breastfeeding. Soreness may be due to some other reason, and should be identified and treated.

Breastfeeding, especially twins can be very draining and tedious. However, you can take a short coffee break at a nearby cafe, go for an evening stroll at a nearby park, take a nap or read a book in between feeds and when your babies are asleep. Once the babies start weaning, you can take longer breaks and start going out for a movie at a theatre or for some retail therapy too. If you are waiting to wean your babies, you may be happy to know that this is a personal decision and the answers depends on the readiness of the babies as well as the mother.

During the past decade, the benefits of breastfeeding have been emphasised upon by many authorities and organizations all over the world. It is probably the most ancient form of feeding a baby and has existed since the beginning of time. It is advised to exclusively breast-feed babies for the first six months of their lives, and this is true of twins too. As mentioned earlier, breastfeeding is especially beneficial for twins as they are often premature. So go ahead and overcome your inhibitions about breastfeeding twins, and the task is sure to become easier as you get a hang of how to do it.