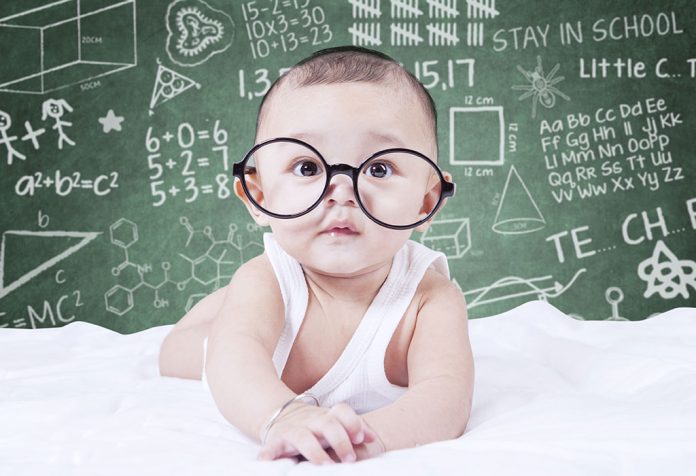 We all want our babies to be tiny geniuses, don’t we? However, finding that spark in our offspring is the key to help them develop it. Parents can judge the intelligence of their baby by observing these signs in their child.

What Makes a Genius?

There is no definite quantifier for being a genius, with the concept being quite subjective. We often see labels such as ‘talented’ and ‘gifted’ being used for children, but how can you make out which child is actually a genius? On a whole, geniuses are people who have the ability to think and learn better and faster than others. With their brain being much more powerful than the average person, you’ll often be able to spot quirks and eccentricities in such kids, from a young age. More than having a higher IQ (Intelligence Quotient), geniuses have the ability to break new ground, be creative, and use their intelligence in a productive manner, which can often change the world. While it is hard to define a genius, there are some signs that are easier to spot in kids, which could indicate that they’re on their way to becoming prodigies.

Signs That Indicate Your Baby is a Genius

If your baby is blessed with unusual intelligence, you will notice the signs quite early during infancy. As a parent, it’s alright to feel that your baby is truly gifted. But true genius, as proven by intelligence quotient (IQ) tests, is not a common phenomenon. Look out for the following 15 signs in your baby, if you want to find out whether you have a child prodigy in the making!

Your baby is full of different kinds of sounds, right from gurgles and giggles to cries. Before you know it, the baby will be 4-5 months old and will begin vocalising. Babies utter their first words around 12 months and graduate to the formation of words by 18 months. If your baby shows interest in words and books during their story sessions, or forms sentences before the age of 14 months, these are early signs of a gifted baby in your family. Few exceptionally gifted babies can easily follow verbal directions to reach a certain place in the home or understand instructions to carry out a certain task.

Babies who are gifted with additional intelligence are emotionally intense, too. This means, they will feel both, positive and negative emotions quite strongly and will have a complex and mature thinking. If your baby is a gifted one, watch how he/she will connect powerfully to people and pets. Such kids need to be encouraged and told that their thoughts are quite normal and vital.

When babies are born, most of their waking time is spent observing their surroundings, people, and their various movements. A gifted baby will seem to make eye contact with the person holding or speaking to him/her. The baby may turn their heads towards someone and respond to sound and actions, immediately. This could also lead to an advanced level of perception. Your baby may be highly sensitive to any changes in its immediate environment, which is a definite sign of heightened perception levels. Your baby may want to wipe your tears or hold you close, if he/she notices a change in your emotional make-up, which is a definite sign of high intelligence in toddlers.

4. Reaches Milestones Earlier Than Others

Is your baby way ahead of time while reaching milestones? Did he/she sit-up without help, before most four-month old babies? Was the baby waving out to you and grasping things, immediately, past the half-year mark? If the answer to the above questions is yes, it indicates that your baby is reaching milestones earlier than his/her peers, and you have a genius growing up in your home.

5. Prefer To Be Alone

Gifted babies are more than happy in their own company, playing with toys, colouring books or solving puzzles. If your child seeks the company of slightly older kids, it is purely to gain a higher emotional and intellectual understanding of things around them. This is one of the signs of high intelligence in babies. Such kids prefer one or two friends, and are comfortable in a small group. If your baby is able to entertain himself/ herself without much of a hassle, prepare to welcome a tiny genius into the family. Such gifted kids can be slightly introverted, too, so be careful not to push them to do something they actually don’t like.

Stubbornness can be looked at as a sign of being determined. A stubborn child will try and negotiate with you, to get what he/ she wants, and being able to do this is a sure-shot sign of intelligence.

Babies have short attention spans and are easily distracted by a new sound or movement happening around them. They may focus on a particular task for about 10 to 15 minutes, by the time they turn one, but beyond that, it’s a stretch. A gifted child, however, is able to focus for longer periods of time, from an early age, probably before he/ she even reaches the six-month mark. Matching shapes and colours is easier for such babies, when they are only 10 or 11 months old. You will also see them point at images and even turn pages while you read out to them from storybooks.

If your toddler is keen to explore everything that surrounds him/ her and asks a million questions that are anything, but mundane, chances are you have a highly intelligent kid in your midst. Be prepared to give detailed answers and back them up with proof, as your kid will ask for it. Do not stifle his/her curiosity, although it may be slightly annoying at times. Prepare for a few questions that stump you, sending you on a Google hunt on your smartphone. So, it’s time to brush up your own general knowledge, too.Opening up a favourite toy train or soft toy to see what’s inside should be expected behaviour from an intelligent baby.

Do not expect your child to give up easily, if he/she is a gifted one. Your child will find newer and, probably, better ways of solving problems that he/she faces and this could include unusual solutions, too. Unable to reach out to the box of sweets kept out of reach? Watch your baby climb on a box or a toy truck to reach out to his/her goal. Smart babies can figure out solutions to problems earlier than their peers and will use imaginative ways to get to the root of an issue they faces in their own tiny world.

Gifted babies have higher energy levels, as compared to kids of their age. They do not need a lot of sleep, but do not seem affected by lesser slee,p nor are cranky in any manner. Babies with a quick-moving brain take a lot of time to ‘turn off’ their brain and, thus, find it difficult to relax, nodding off to sleep later than other babies of their age.

The heavier a newborn, the higher their intelligence level. Various studies conducted about newborn babies have shown a slightly higher IQ in babies who had a larger birth weight. This could be due to the fact that heavier babies are nourished in a better way than babies with a lower birth weight. Mothers who give birth to heavy-weight babies can rejoice, for the fact that they have probably brought a child prodigy into the world.

If you and your spouse have good command over different languages, try speaking to your baby and communicate with him/ her in as many languages as possible. This way you are encouraging a faster brain development process in your toddler, without making a special effort in that direction. Babies who are born to parents who know more than one language ,are capable of performing better on IQ tests and live better-quality lives later on.

There is a lot of space at the top, and parents with tall kids (or longer babies) can revel in the fact that their children can perform better at school tests than most others. Studies show that taller children are better performers when it comes to cognitive tests, even before structured schooling begins. Reaching greater heights is easier when children are taller, and thus, they have an advantage over the competition.

Your toddler may possess a razor-sharp memory, right from the early years, if he/ she truly is a super-intelligent kid in the making. Your baby is likely to remember places visited before, names of people, and even specific locations of things we adults often give up searching for, thinking they’re lost. As a baby, he/she may know that the bedroom is where one sleeps and the kitchen is for mealtimes. You may notice that other kids may forget certain things, but your child remembers every single piece of information that his/her brain has processed.

Is your toddler making up stories or playing with imaginary friends? Does your baby make up situations that seem too intricate for his or her age? If yes, you could certainly expect a genius to grow up in your home. You may have to reign in the baby’s fertile (at times over-fertile) imagination, especially since it could lead to complex situations. But be sure to never curb it.

While parents are the best judge of high intelligence in their child, there could be certain cases and situations where it is difficult to diagnose it. However, taking an IQ test or connecting to a professional from the field is also recommended to reach a confirmation. Enhance these signs by doing things like pointing out to specific people or things, so your child connects to them. Speak clearly and try to limit “baby talk” to a few words, if you want your baby to speak real words quickly.