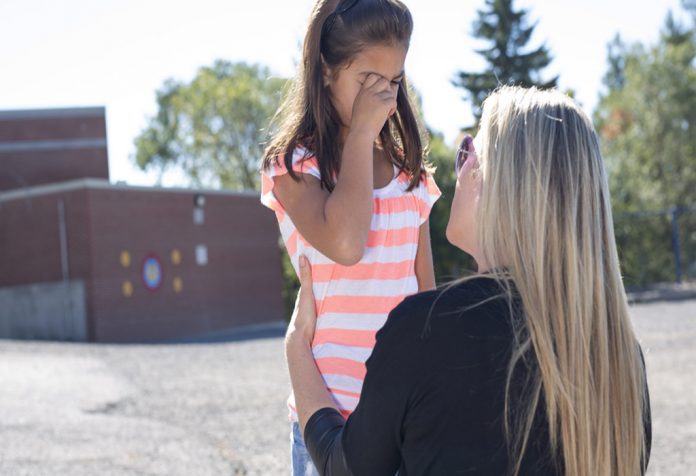 Parenting can be a difficult time, especially with the first child. As the child grows, you are concerned not just about the physical aspects of the child, like his diet, but also about his mental well-being. Parents are required to strike a balance between tough love and pampering the children, as too much of anyone can be detrimental to the mental growth of any child.

The first hurdle that parents face in this regard is usually when the child is admitted to a school. Inevitably, at some point or the other, your child will refuse to go to school. This problem is termed ‘school refusal’, and is common to a great extent. Tackling such problems can be difficult, but not impossible. It is important that the parents analyse the probable causes behind such behaviour, before making a move to make your child feel more comfortable about going to school.

What is School Refusal in Children?

School refusal syndrome occurs when the child simply refuses to go to school, owing to some reason or the other. The child may not want to go to school, maybe afraid or simply refuse to do so. He could also have a school avoidance disorder which may even manifest as physical symptoms, like sickness or general sadness in the mornings. Due to anxiety, the child may prefer staying at home and doing other activities instead of going to school.

Causes of School Phobia in Kids

The reasons behind why the child behaves like this can be many, and it is important to understand them from the perspective of the child. The common reasons behind school refusal syndrome and your child not going to school are given below.

School phobia is something that can easily be noticed, especially by the parents. There are obvious symptoms that the child does not like going to school, like straightforward refusal. Some of the common symptoms are given below.

School plays a huge role in forming a child’s personality, and the mental growth of the child. Going to school not only gives the child knowledge about the world but also cultivates his personality. The school puts children in an unknown environment and prepares them for the real world and adulthood right from the start. Not attending school can make the child lag behind in terms of mental and emotional development, and they may end up clingy towards their parents.

The tools which help the parent determine whether the child is going through school withdrawal symptoms are:

How is School Phobia Treated?

The treatment largely involves a psychological approach, and various counselling and desensitisation techniques.

2. Systematic Desensitisation: The child is gradually taught and helped to modify his reaction to school and make it less harsh on himself emotionally.

3. Exposure Therapy: The child is exposed to the stressful environment gradually, and is guided throughout to correct his maladaptive reactions to the situation and cope well with the changes.

4. Operant Behavioral Techniques: This involves rewarding the child for the desired behaviour so that the frequency of the behaviour increases.

Other Therapies and Medication for Children Who Experience School Phobia

Serotonin reuptake inhibitors like Prozac are useful when trying to cure depression in the child. However, these have to be used with caution as children can become dependent on the drugs, thereby worsening the depression. Such dependency can also increase the chances of bipolar disorders and suicidal tendencies. Sudden discontinuation can also cause anxiety, insomnia and headaches in the child.

Some drugs which help the child mask the symptoms of anxiety, like sweaty palms and racing heart are also useful. However, drugs like propranolol have to be used with utmost care, and never in asthma patients. These should also not be discontinued suddenly, as this can lead to an increase in blood pressure.

Is Follow-up After Treatment Essential?

If the child is being or has been treated for school withdrawal syndromes, after-treatment follow-ups are absolutely essential. The child has to be monitored closely by the family, school staff and the treating professionals in the period after treatment.

What Should Schools Do to Cope with School Refusal?

Here are a few ways schools could cope with a child’s school refusal.

What Can Parents Do About It?

Parents dealing with a child with school refusal can consider the following approaches.

How to Control or Prevent School Refusal?

If a preschooler refuses to go to school it is nothing new. The routine usually improves with a little bit of care and counselling by the parents and teachers. However, if the problems tend to go on for too long or become worse, the prognosis is still excellent with the help of professional treatment.

School can be a daunting process for children, so the refusal to go to school is nothing new- it is a common behavioural trait among children. While this can be tackled with the help of some small lifestyle and attitude changes by the parents, you might need to get the help of professional support if the school refusal behaviour worsens over time.