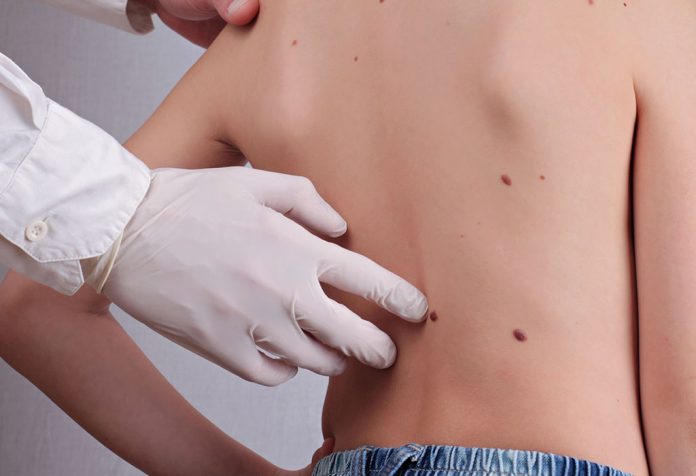 There would be no man on earth who wouldn’t be aware of moles. Mostly hereditary, moles are visible spots on the skin. Moles are also known to be birthmarks that may appear on any part of the skin. If you are worried about the mole and its size on your kid’s skin, the following section would be a knowledge booster.

Scientifically known as the melanocytic nevus, a mole or is a common growth on the skin. It is like a small lesion on the skin’s surface that could vary in colour and size. A mole on baby could be flat, raised, small, or even enlarged. Moles are known to generally appear in the first two decades of a human’s life. The moles may get bigger or can even fade away with time.

Most of the times, moles are not hazardous. These are normal occurrences on the skin that may appear to be on any part of your body. In very rare cases, melanoma could be something your kid has to go through. This is a severe form of skin cancer that may start due to the mole.

A congenital mole or an atypical mole is more prone to melanoma. Getting the abnormal occurrence and appearance of moles checked would be the possible situation, while there is still time.

Can Moles Change Over Time?

Moles can and do change over time. Be it the colour or the size; moles tend to change in a human’s lifetime. Though the change is a slow one, moles start out small and turn out to enlarge with time. The shade of the mole may also change with time as it may get darker in certain stages in life. For your surprise, the mole on your kid may also fade away with time, but again it would take some time.

Moles may even develop hair on it that could turn out to look ugly. Talking to a dermatologist would be apt in this case as your kid may lose confidence and may stop interacting socially.

When Does Your Child’s Mole Needs to Be Checked?

Though melanoma is rare in kids, it needs to be checked upon if the following symptoms arise:

Generally, a mole grows slowly over time. And, it is common that the mole may lighten or darken with time. But if the mole on your baby’s body grows at a rapid rate, it could be a matter of concern. Also, notice the appearance of the mole. If it appears to be ugly and different from the usual ones, it could be melanoma.

Moles are generally flat, and if raised it is to very small fractions. But if the mole is raised to an extent where it is quite visible to the naked eye, and seems like dome-shaped, contacting the dermatologist is a preferable option. They would examine the mole closely and if found serious, could even suggest getting it removed.

Mostly harmless, a mole could be nothing more than a spot on the skin. However, there may be times when your mole gets irritated and may itch to the extent that it bleeds. If the moles on children’s face or anywhere across the skin appear to be wound-like, consult a dermatologist.

Moles could be birthmarks or may even emerge with time. It is normal for your kid to develop moles at any point in time. The concern may arise when your kid develops over 50 moles. Even a study points out the fact that teenagers with over 100 moles were victims of melanoma.

In common cases, a mole is a rounded structure that appears to be as small as a dot. However, there are also cases where your ward may have an enlarged, visible spot on the skin. A mole that is 7 inches in diameter or more is something you should worry about. Diagnosing such large moles for melanoma thus becomes an essential task.

How to Prevent Mole from Developing?

One has no control over the moles that emerge as birthmarks. On the contrary, you can help control the ones that appear with time. Sunlight has been known to amplify the mole frequency and the shade variance. This is why limiting the sun exposure is recommended.

Another avoidance method could be applying sunscreen whenever your baby steps out in the open in the daytime. Also, look for shady areas where your kids could play and keep them covered with hats on their head and full-length clothes on the body.

When Does Doctor Recommend Removal of Mole?

Usually, a mole is something you should be least bothered about. But if your kid complains of irritation and is always scratching through the mole, you need to consult a dermatologist. He can prefer removing it if the need be.

Also, if melanoma is found to be present on the mole, it might require surgery for getting rid of it altogether.

This was about moles and how it may affect your kid’s life to an extent. All you need to know is moles are common occurrences on the skin but if any of the mentioned melanoma symptoms are noticed, consulting a dermatologist is never too late.