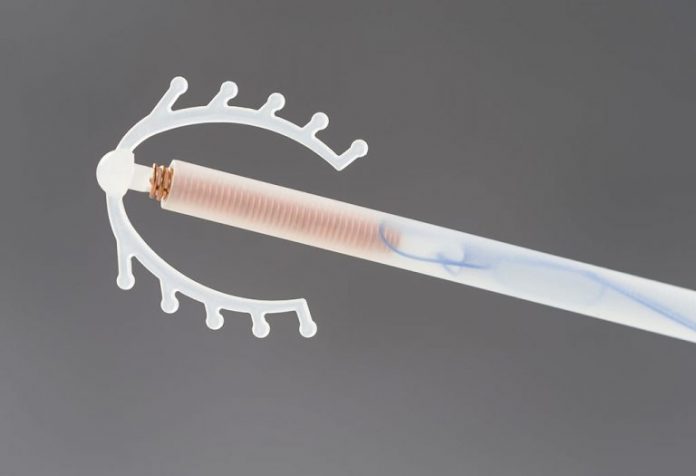 Birth control options for women have gone through a lot of changes over time. An IUD device is an effective birth control method that is available to women today.

What is an IUD?

IUD or Intrauterine Device is a birth control method for women. There is a T-shaped device inserted in the womb of the woman to prevent pregnancy. It is an appropriate choice for those who cannot use other forms of contraception like birth control pills. Prior to using this method, you should have a discussion with your doctor to check if IUD is the correct type of contraceptive for you and evaluate all the risks and benefits. You may carry on with your daily life as normal (have sex, exercise, and use tampons).

What are the Types of Intrauterine Devices?

There are 2 types of IUDs:

These are the most commonly used IUDs. A copper wire is tied around the stem of the T shaped device. This can stay for up to 10 years and is a highly effective method of birth control.

It is supposed to be slightly more effective in preventing pregnancy than the copper IUD. This IUD can prevent pregnancy for up to 5 years depending upon the type used.

Who Can Use an IUD?

IUD can be used by most women – young women and women who have never had children too. However, the chances of the device being expelled are higher in women who haven’t given birth because the size of the uterus will be smaller than a woman who has had a prior delivery. IUDs are also highly suitable for women having heavy periods.

You may use the IUD in all the following scenarios:

Who Shouldn’t Use an IUD?

You may also not be able to use IUDs if you recently had pelvic inflammatory disease (PID) or are allergic to copper. Your doctor will assess your suitability for this method of birth control.

How Does an IUD Work?

The intrauterine device is a contraceptive device made of flexible plastic which is inserted into the uterus. It is a highly effective long-term contraception and can be reversed conveniently.

Copper IUDs – Copper acts as a spermicide preventing the sperm from travelling to the cervix and changes the internal lining of the womb, which makes it difficult to conceive.

Hormonal IUD – This IUD releases a hormonal progestin, which thickens mucus in the cervix. This prevents the ovary from releasing an egg and thus prevents pregnancy.

How Effective is an Intrauterine Device (IUD)?

IUDs are considered to be one of the best methods of birth control and are 99% effective. You do not need to remember to take it (like the pill) or use it incorrectly (like a condom).

At the time of insertion, your doctor will first clean the vagina with an antiseptic solution. Then a speculum is placed inside the vagina which slowly draws the uterus closer to the vagina. Then the IUD is inserted with the help of an applicator. You may feel a brief pain or cramp which is temporary. The procedure takes about 5 minutes.

The applicator is then removed, and the arms of the IUD spring open into the T formation. Once the IUD is inserted, you will not feel anything. The strings attached to the end of the IUD will hang through the cervix and protrude slightly into the vagina. You should not fiddle or tug with the strings else the IUD may be displaced.

IUDs remain in the uterus where it has been inserted. In some cases, they might come out due to incorrect insertion. This is a rare occurrence.

How Soon Does an IUD Begin Functioning

If the IUD is inserted within 7 days after the start of your period, it is effective immediately. If inserted at any other time during the menstrual cycle, then you should use some other form of contraception if you plan to have vaginal sex within the 1st week of insertion. Pregnancy protection starts after 7 days.

What Can You Expect After Treatment?

After the procedure, you may feel a little cramping till a few days. Your doctor might tell you to take some medication (pain killers) to prevent the cramps.

You many need to come back for a check-up after the next period. They will check if the IUD is still inside and check for infections.

There may be some spotting after getting IUD which goes away within 6 months. Hormonal IUDs cause your periods to become scanty, and you may stop getting periods also. The Copper IUDs cause periods to become heavier. If you feel any discomfort due to the IUD, then you should immediately consult your doctor.

Although there is very little chance of the IUD slipping out, it may happen during the first 3 months. They are most likely to come out during your period, so you should check your pad or tampon to see if it fell out. After the IUD has been inserted, it is recommended that you use sanitary pads. If you are using a tampon, then it must be changed frequently, and care should be taken while pulling it out so that the strings of the IUD are not tugged or pulled at.

Once the insertion of IUD had been completed, most women feel well enough to resume their normal life. Medication is prescribed to ease out any pain.

In case the IUD falls out, you will not be protected from pregnancy. Hence, you need to visit your doctor or use some other form of contraception in the meanwhile.

How Long Can IUD Last

The Copper IUD can last up to a period of 12 years, and the Hormonal IUD can last anywhere between 3 to 6 years.

However, there is no minimum time frame for the IUD to stay in. You can have it removed any time you wish to.

You will need to keep track of when IUD has to be replaced. IUD placement may seem to have a higher upfront cost. However, it turns out to be cost effective in the long run because the IUD’s protection can last between 5 to 10 years. They are an inexpensive and reversible form of birth control.

Can an Intrauterine Device Be Inserted Anytime?

It is safe to insert the Intrauterine Device during the menstrual cycle. During this time, it is unlikely that the woman is pregnant and the cervix also dilates during the flow. Dilation helps make insertion easier.

What are the Complications and Risks of IUD?

IUD is one of the most popular forms of birth control across the world. Once inserted, it does not require maintenance and is extremely effective.

What are the Advantages of IUD

How to Ensure IUD is Still in Place

There are no serious problems that are caused by IUDs. However, sometimes, the strings of the IUD cannot be seen because they are drawn back into the cervical canal. In very rare instances, the missing IUD may be due to pregnancy or uterine perforation or expulsion. Therefore, it is important to know how to check if the UTI is still in place.

How is IUD Removal Done

If you want to get the IUD removed, you need to visit your doctor. Please do not try to do it yourself. The doctor will remove the IUD when it has reached its expiration date or if you are facing some medical problem.

Then your doctor will remove the speculum.

Can IUD Affect the Ability to Get Pregnant?

Once you remove the IUD, your fertility levels return to normal at once. IUD does not cause infertility, and once the IUD is removed, you can definitely become pregnant. There are no risks of infertility due to IUD.

If you are unable to unable to conceive even after the removal of the IUD then you should consult your doctor.

In What Way Will IUD Affect My Periods?

The Hormonal IUD and Copper IUD affect the periods in different ways.

Copper IUDs cause your periods to become heavier, longer, and accompanied with cramps. In this IUD, the uterine lining takes time to adjust to the foreign body so there may be little bit of inflammation or tissue damage.

What Symptoms May Indicate a Problem?

You have to be observant of any unusual symptoms related to the IUD. These include:

What Happens if a Woman Gets Pregnant While Having an Inserted IUD?

You will still ovulate with the IUD inserted in the uterus, unlike some other methods of birth control.

The IUD can sometimes slip partly or completely out of the uterus. This happens women during the first year after the device is inserted, and occurs mostly within the first few months.

Sometimes, the IUD may get embedded into the uterus. In some rare cases, the device may pierce the uterus. If this happens, then the device will not work, and it needs to be removed and replaced.

Another thing to remember is that while the Copper IUD starts working right after it is inserted., the Hormonal IUD starts working immediately only if inserted during the first 7 days of your period. If the Hormonal IUD is inserted at any other time during the menstrual cycle, then it will take 7 days to be effective. Hence, it is advisable that you use some other form of birth control in the meanwhile. Not doing so can lead to pregnancy.

When Should I Call a Doctor?

The doctor follows the correct process to insert the IUD. However, sometimes, it may be pushed out or displaced due to contractions in the uterus. In case you have excessive bleeding or discomfort, then you should consult the doctor immediately and start using an alternate method of birth control.

These symptoms may signal there is a problem –

1. Can I use IUD while breastfeeding a baby?

Hormonal IUD (Mirena) can cause problems in breastfeeding. Mirena IUD releases progesterone into the body, and this causes a reduction in the milk supply for a breastfeeding mother.

2. Will I need backup form of contraception after insertion?

IUDs have a success rate of 99%. However, depending upon the type of IUD, it may not start working immediately and may require you to use alternate contraception. As discussed earlier, if you have used Copper IUD it starts working immediately. Copper IUD may even be used as a form emergency contraception. In case you are using a Hormonal IUD, and it has been inserted within the first seven days of your periods, then it starts to work right away. Else, you will need to use a backup birth control in the meantime.

3. Will my partner feel the IUD?

No, the IUD cannot be felt while having sexual intercourse. In case you feel the device, then you should consult the doctor. You may feel some pain though during sex in the initial days after the IUD insertion has been done.